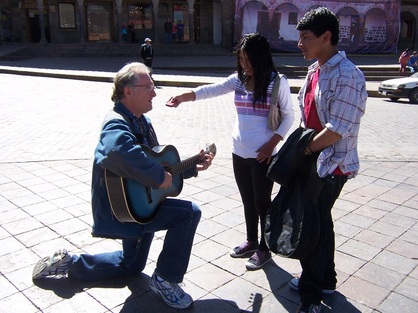 It was just two hours after arriving in Cuzco, Peru, before we visited the bustling and festive town square.  While there, students from the local High School approached us with a language assignment - to speak English with us.  After a few minutes, I borrowed their guitar, and to thank them for talking with us in English, I taught them one of my favorite Spanish songs.

The song "Para los Ninos" translates "For all the children of the world, we want peace and liberty".  While singing the song in this ancient city, a city that dates from around 900 AD, I reflected on the contrast of how wonderful it was to share a song of peace in Spanish, the Official Language of Peru, yet feel the strange pull that this language was unheard in Peru until the Spanish conquered Cuzco under Pizarro about 1533.

The original language and the original culture of this area is known as Quechua. This culture has survived from about 1100, through the conquering Spanish of the 1500's and in many cases - in architecture, religion, food, art - the Quechua culture is the root and foundation upon which the Spanish culture of modern Peru grows and flourishes today. Although ancient, it thrives, and when combined with the modern Spanish, forms a new culture of rich art, food, and living that is only found when cultures combine.

We learned no songs in Quechua while in Peru, yet in speaking with our guide, who spoke flawless English and Spanish alongside his native Quechua, I was reminded of another song with the lyrics "We all sing with the same voice - and together we sing in harmony".  A startling example of the idea expressed in these lyrics came soon after returning home.  Listening at a concert, I heard and learned of a song called "Hanacpachap cussicuinin".  It is a song with lyrics written in the Quechua native language of Peru and music composed in a European Sacred Style.  It is arguably the earliest example of European influenced polyphonic music found in the New World and is a musical example of two peoples - the culture and language of Quechua and the culture and music of Europe - combining together, in the same voice and harmony, into a "Mashup" between two distinctly different cultures. 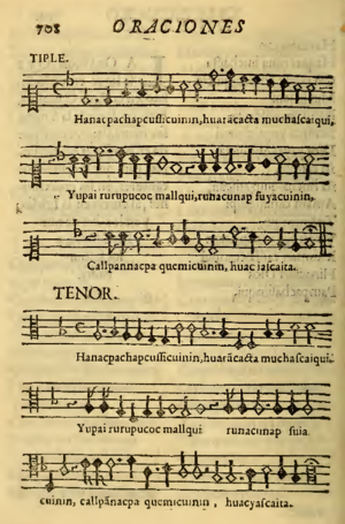 Likewise, singing in harmony is a "Mashup" - one of sound and heart.  To really sing the sounds of harmony, hearts must also be in harmony to reveal the true beauty of the sounds sung together.  With a caring and feeling human heart, singing music can truly move those who hear. To sing without heart is mere reproduction that any computer can accomplish.  And without a group heart, no true music can succeed.

In our work, each teacher leads students to build strong foundations upon which joy filled future lives are constructed.  Over many years I have had the honor to work with teachers and students who gladly share their hearts and therefore harmonize with such joy in life that they can't help but to sing with joy - and with harmony!  I am overjoyed to work with the community of Merriam teachers and students who know that community in harmony brings joy - and care to send their joy out into the world.

Every time I sing with my students, my memory goes back to those two students in Cuzco, who brought their hearts to fulfill a school assignment, who sang with me in Peru, creating an instant community, one where I can't help but "think to myself, what a wonderful world".

Inca Culture - ancient "Leaning" walls serve as foundations upon which modern "Straight" walls are built, keeping the modern walls from collapsing during earthquakes due to the ancient walls strong foundations. 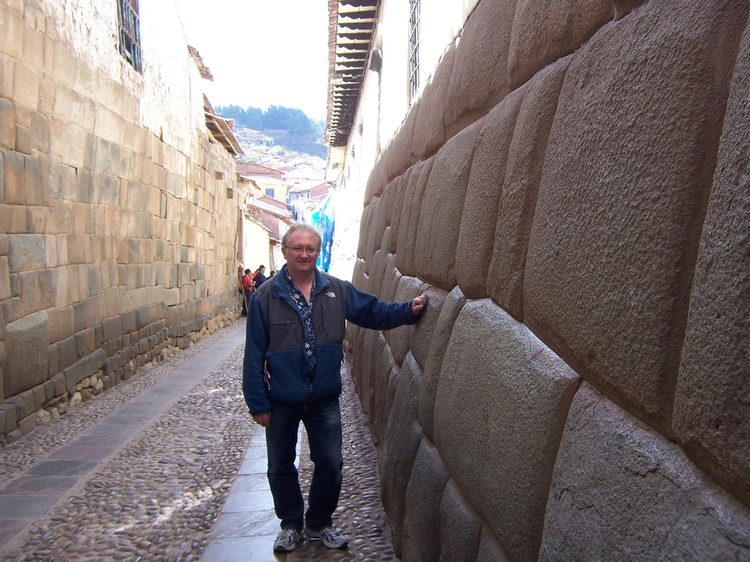 "Lean on Me, when your'e not strong..."   Why are these ancient Quechua walls strong, and still standing after centuries of earthquakes while modern walls made with modern architectural ideals collapse?

"And I'll be your friend - I'll help you carry on..."    The Quechua walls are built of hand quarried rocks - many of which are car or truck sized boulders! - that are not square, are dressed in odd shapes and individually placed - yet when assembled in community to lean inward on each other and fit together intricately they interlock and support one another against the shaking of the earth that might crumble them -

"For it won't be long 'til I'm gonna need somebody to lean on."....   They resist the shaking of the earth and have been doing so for centuries -  they are strong in support because they are individualized,  simultaneously lean in on one another and support each other, but are not like one another.  Their combined strength is found in their individual uniqueness and peculiarities combined with their strong support of one another - in their leaning on one another and in their unique interlocking shapes they gain strength.

"You just call on me brother when you need a hand..." - In today's educational world, much is made of common core and formalized educational methods.

The wise will remember that strength is found in individuality strengthened by support of one another in a community that knows we all need each others talents and peculiarities to succeed.

Thank you, Bill Withers, for the lyrics.
Powered by